Bear, the two year old Pomeranian came to Woodgreen after a life spent caged on a puppy farm. He arrived on site with several medical issues.

Bear, a Pomeranian breed, who also appeared on The Dog House, Series 1 Episode 2, arrived at Woodgreen in quite a poorly state. He was advertised on the Gumtree website, an interested buyer went to meet him and was so appalled by his living conditions that they rescued him, and reported the owners to the RSPCA.

“I tried to spend a lot of time with him, just to build a relationship with him so he had someone he could trust.”

When Bear first got here, he wasn’t in the best state. He was really, really worried, his legs had some significant muscle wastage likely from not using them very much, and his teeth were really, really poorly. He had really bad gum disease which had been neglected for quite a while. He was just hiding, trying to stay away from people, he was really anxious. You could see there wasn’t a lot of trust in him with people, just trying to keep to himself really.

Gemma one of our dog handlers spent a lot of time with him, just to build a relationship with him so he had someone he could trust. We got him some medical attention, had a good look at his teeth, got him X-rayed to check out his legs, which it turns out they weren’t quite as bad as we had originally anticipated, he didn’t need any surgery. He’s had quite a horrible dental operation, he had to have 17 teeth out in one go. But since having that he’s so much better, so much happier.

He had been living in a crate outside for most of his life so we gave him a good wash, got him onto some food, because he was living on hotdogs, so initially he was reluctant to eat anything good for him. We spent lots of time teaching him how to walk on a harness, we don’t think he’d ever worn one before, and just sort of teaching him how to be a pet, really, and be loved. 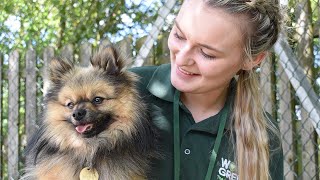 His biggest change is how confident he is with trying new things now. Initially he was really worried and didn’t want to go near anything new and now he’s much braver. How to support a nervous dog

Dogs are social animals, but like us, they may not be confident with everybody they encounter. Your dog looks to you for guidance, so here’s what you can do to help them relax around new people.

Whether it's a dog like Bear, who suffered neglect, or one line Dennis found abandoned on the road, we're here to help - with your support. We're honoured to give Channel Four access to Woodgreen for The Dog House. Explore more and see the work our handlers, vets, specialists and volunteers do every day, giving animals another chance at life.